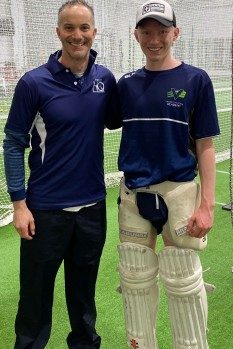 It’s been an incredible first week back at Cricket HQ and I’m excited to announce that Michael Klinger, the current coach of the Melbourne Renegades BBL team, has joined the coaching panel. Michael captained the Australian under-19 cricket team and forged an amazing first-class career accumulating 11,320 runs including 30 centuries. His highest score was 255 against Western Australia and he played T20 cricket for Australia with a top-score of 62 against Sri Lanka at the Adelaide Oval.

On the weekend Michael ran dozens of sessions as part of our Winter Program and the feedback has been phenomenal. He is now available to run private coaching sessions during the school holidays so ambitious young players can get access to a world class batting coach. You can book a 45 minute session with Michael by clicking here and the cost is $85 for a 45 minute session. This week Michael is available on Tuesday (11.30am to 2.30pm) and Thursday (11am to 5pm).

Michael has been appointed Head of Male Cricket at Cricket NSW. This is a high level appointment and we congratulate Michael on his appointment after two seasons as coach of the Melbourne Renegades in the Big Bash League. He will be overseeing the development of NSW players and teams while integrating high performance systems from the top level down to Premier Cricket. Cricket HQ was blessed to have him on our coaching panel last season and we hope to have him back in Melbourne at some stage in the future!