Sports coaches are a leading positive influence on today’s youth.

The coaches at Cricket HQ believe their role extends beyond simply teaching players how to bat, bowl and field. While the foundation skills are important, coaching is also about building confidence and shaping children's perception of themselves. The approach a coach takes to correct a technical fault or reinforce a positive behaviour can have a big impact on the development of a young cricketer's self esteem.

Cricket is a game but it is also a microcosm of life. It develops life skills including concentration, confidence, resilience, how to cope with anxiety plus the importance of hard work and team work. Our panel of coaches also assist with mental preparation, goal setting and teach competition strategies.

The coaching role can be complicated and can include instructor, teacher, motivator, disciplinarian, substitute parent, social worker and friend. Cricket is a technical game yet the average volunteer junior coach has little formal training and usually became involved in coaching because their children played the game. They typically drop out of coaching when their children stop playing junior cricket.  Our panel of coaches love what they do and are passionate about producing great outcomes for the boys and girls, on and off the ground.

As you would expect, they all hold current Working with Children Checks and are accredited coaches with Cricket Australia.

They are all involved in delivering coaching as part of our development program, the Victorian Junior Cricket Academy.

Pat is the architect behind Cricket HQ and has coached junior teams in the area for decades. He has built a reputation as one of the leading batting coaches in the region with players and clubs approaching him for assistance. In the past 9 years he has coached various teams in the SECA competition across all grades (A, B and C) plus all age groups including Under 12, 14, 16 and 18.

He is a multiple A grade premiership coach at both Under 12 and 16 levels plus he led Ormond Cricket Club’s Under 16A team into 3 consecutive grand finals (back to back Premiers in 2016/17 and 2017/18). He also took their Under 12A team to the grand final in 2017/18 and for the past 2 seasons he has also been heavily involved in Ormond’s back to back premierships in the Under 15 J G Craig Competition.

Pat was Ormond Cricket Club’s Junior Co-ordinator for several years and is now Club President. He sits on the South East Cricket Association (SECA) junior executive and established the Ormond Junior Cricket Academy a number of years ago. That program includes a 12 week winter batting program that has had a huge impact on the junior players involved. For example, four boys in that program played in the Victorian Under 15 metropolitan team in 2016/17 and three graduates played in the Victorian metropolitan team in 2017/18.

He is passionate about the game and junior development and says, “The game is a microcosm of life and teaches you the importance of discipline. There is no substitute for hard work and the game helps builds up resilience in players because the game can be full of highs and lows”.

Pat believes the foundation years are critical which is why he created the Victorian Junior Cricket Academy that caters for players as young as 8 that teaches them ‘senior’ cricket principles designed to set young players up for success.

On the ground Pat had a distinguished junior career captaining both his school first XI and the combined ACC team. He played Premier Cricket for several years before returning to captain/coach his original junior club. In 2016/17, after 20 years retired from the game, he made a comeback in his mid 50’s and managed to play a few games for Ormond (sub district) seconds.

Pat’s passion is infectious and Cricket HQ is the culmination of many years of dedication and hard work. He says, ” Helping ambitious boys and girls achieve their sporting dream is incredibly rewarding and I recognise the fact that coaches can influence more people in a single season than a lot of people do in a lifetime. Cricket HQ is my dream and hopefully we can make a lot of boys and girls achieve their cricket dream.”

Michael is a former Australian under-19 cricket captain and is the current coach of the Melbourne Renegades BBL team. He forged an amazing first-class cricket career accumulating 11,320 runs including 30 centuries with a highest score was 255 against Western Australia. He played T20 cricket for Australia with a top-score of 62 against Sri Lanka at the Adelaide Oval.

Michael's career saw him play for three different state teams (Victoria, South Australia and Western Australia) and he was named State Player of the Year in 2009 and 2010. He also played County Cricket in England and the Indian Premier League. Michael was the highest run scorer in BBL history when he retired in 2017.
Michael has now moved into his full time coaching role with Cricket NSW and as such, he is no longer available for private coaching.

Will is a Level One accredited coach and while only 24 years of age, he has built a huge profile in the sport of cricket and within the SECA junior ranks.

He has brilliant ‘people skills’ and in March 2017 he was awarded the Victorian Sports Young Volunteer Award.

Having coached junior sides for over 6  years, he has the necessary skills to teach and mentor players of all ages and abilities. He has coached junior teams to several premierships in recent years including the 2019 SECA Under 12 Mitchell Shield Team that went through the carnival undefeated. His record in Mitchell Shield for SECA is impeccable with one loss in 16 games. He also coached the Under 14A Grade team at Ormond that went through the season undefeated and then and then followed an 16A Grade Premiership, along with an Under 15 Craig Shield Premiership at Ormond where he was the assistant coach. He is a natural leader and engages with young cricketers that led to his appointment as coach of the SECA Under 12 Mitchell Shield team in 2017/18.

Will's approach to the game is that of a modern coach – aggressive, positive and confident. He understands that every child is different, “They all have their individual strengths and weaknesses and the weaknesses aren’t necessarily a bad thing, it is a chance for the individual to learn that they can overcome these obstacles with hard work and dedication”. Will believes these are life skills learnt through cricket. These lessons learnt are not only the key to success with the sport of cricket, but in life too.


On field, Will plays sub-district firsts at Ormond Cricket Club as a pace bowler.

A stylish wicket keeper/batsman that matured into a fine keeper noted for his athleticism and work up to the stumps to the quicks and his adaptability to be selected as a specialist top order batsman in sides containing international players including:  Steven Fleming, David Hussey, Younis Khan, Samit Patel ,Graeme Swann and Ryan Sidebottom.

In 2007 David decided that it was time to seek new pastures, emigrating to Australia where he has held various coaching roles with organisations such as:-

We are extremely happy to have someone with David's experience, qualifications and background joining our panel of coaches at Cricket HQ. David is currently available for one on one coaching on Wednesday and Friday afternoon/evenings. Just head to our booking site and choose David from the drop down list of available 'Practitioners'.

Michael is a Level 2 accredited coach and had a distinguished and decorated playing career at Brighton Union Cricket Club in Longmuir Shield. He also played a lot of junior representative cricket including Mitchell Shield (SECA Premiership), Ormond Cricket Club (Hatch Team) and Under  16 Dowling Shield at South Melbourne. He was also an Under 12A and Under 14A Grade premiership player at Brighton Union. 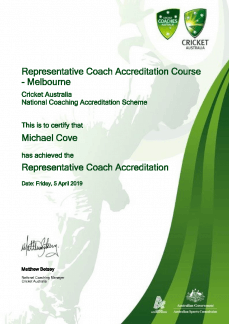 His playing days were cut short by knee injuries but he has subsequently carved a coaching career and is currently the head coach of the 1st XI at Wesley College in Melbourne. In his role at Wesley he works closely with several former Australian Test Cricketers including Damien Fleming, Julien Wiener, Michael Beer and Bobby Quiney.  In 2021 he was appointed assistant senior coach at Premeir Cricket Club, Prahran.

Michael is also the current Ormond Under 15 J G Craig Shield Coach who won back to back premierships in 2017 and 2018 plus also the 2020/21 premiership. He has also coached at the senior level with Brighton Union in SECA and in the Victorian Sub District Cricket Association (VSDCA) with Ormond Cricket Club.

He has vast experience with junior coaching including in the pathways programs in England and Ireland where he worked with many first class cricketers. Locally he has worked with numerous up and coming junior players, many of whom have gone on to represent Victoria and Australia at under-age levels.  His innovative fielding drills are unique and he heads our 'Captain's Corner' sessions that provide young team captains with game day strategies. Michael is available at Cricket HQ for specialist coaching.

We welcome Joel Fernando back on the coaching panel and parents and players who have been involved in our Winter Programme would be familiar with Joel. He is available on Wednesdays for one on one coaching from 4pm to 8pm and he will also head up our 'Prep for Rep' programme for Under 12 players. You can book him here Visit Booking Page

Miles Sellenger was added to our coaching roster on Sundays (11am to 5pm) and Mondays (4pm-8pm) and his batting and leg spin classes have been a massive hit. It's very rare that you get instant results in life or sport. In fact, in cricket coaching circles we often say it takes 10 years to become an overnight success. Our spin coach Miles Sellenger has been working with a 14 year old boy (Senin Seymour) for the past few weeks and in December 2020 he took 5/0 in the Under 16A SECA competition and then the next day he took 5/13 in the seniors in the VSDCA 4th XI competition. Senin is a dedicated hard working cricketer but small technical tweaks can make a big difference in batting and bowling. Here is the article that appeared in the Glen Eira Leader newspaper regarding Senin's extraordinary weekend.
https://www.heraldsun.com.au/leader/inner-south/sport/legspinner-senin-seymour-takes-50-for-ormond-juniors/news-story/a2a728b800f9da748c61284614ee0cf6

If your child is looking for a spin class, Miles works on Sundays (11am to 5pm) and Mondays (4pm-8pm) and you can book sessions with Miles here Visit Booking Page

Our first time with Miles and my son learnt a lot and really enjoyed the session. We will definitely be booking more lessons soon..
- Mark Darley - 31/3/21
Very good session. Miles just took coaching a level up for my son Shlok. Lots of take away.
- Suhas - 30/3/21
Miles is very knowledgeable and professional.Looking forward to work with him for Elijah in the coming days.
- Ananth Surenthiran - 23/3/21